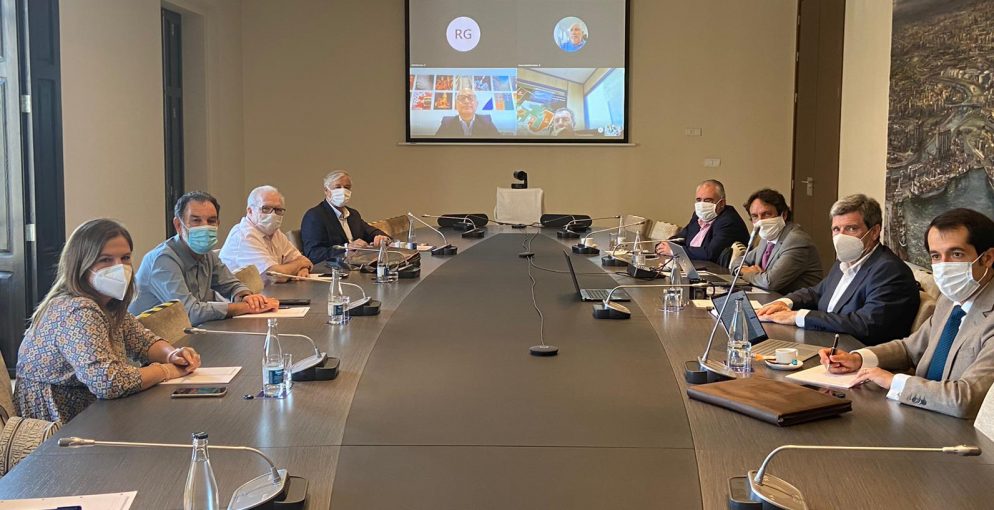 Valencia, 23.06.20.- The ordinary meeting of the Board of Trustees of the Fundación Valenciaport took place this morning at the Clock Building of the Port of Valencia, at which the Annual Report and the Annual Accounts as well as the Management Report of the Foundation for the year 2019 were approved.

During the meeting, Antonio Torregrosa, the entity’s general director, reviewed, as usual, the new innovation projects on which the Fundación Valenciaport has been working since the beginning of 2020, highlighting the seven major projects financed by the Horizon 2020 programme. These are: iNGENIOUS, a project whose aim is to design the next generation of IOT technology to serve and add digital value to the supply chains of the future; PLANET, an initiative that will develop tools to improve the interconnection of infrastructures (TEN-T, Freight Railway Corridors) with geopolitical developments (new Silk Road and emerging trade routes) and will optimise the use of current modes of transport through new technological solutions; NEMO, which aims to create a global and scalable solution to improve air quality and reduce noise impact in EU cities; and the recently approved MOSES, which will significantly improve the SSS component of the European container supply chain by addressing the vulnerabilities and stresses related to the operation of large containers; CYRENE, a project focused on improving the security, privacy, resilience, accountability and reliability of supply chains;  RESPOND-A, which will develop state-of-the-art technologies and strategies for the protection of infrastructures against extreme situations caused by the impact of climate change, industrial accidents and/or terrorism; and STAMINA, whose main objective is to support decision making for the prediction and management of pandemic crises within and across European borders.

Torregrosa also highlighted the participation of the Fundación Valenciaport in a new project financed by the ENI CBCMED programme: YEP-MED (Young Employment in Ports of the Mediterranean), an initiative for social inclusion in the port-logistics labour market; as well as the recent approval of the continuation of the DEEP DEMO project (DEEP DEMO II – Valenciaport Towards Net-Zero Emissions in 2030), co-financed by EIT Climate-KIC.

With respect to international technical assistance, and despite the fact that travel limitations directly influence this area, Torregrosa informed the Board of Trustees about the completion of the consulting service for the Master Plan of the Port of Callao in Peru, in addition to the extension of the scope of the contract with the Inter-American Development Bank (IDB) to implement the Smart Port Toolkit. On the other hand, the director of the entity highlighted that technical assistance on operations and strategy has been developed for the TPE terminal of the Port of Paita in Peru and that the development of new products is being finalized to offer to partners and clients, both in the second half of 2020 and in 2021.

Regarding the training area, the director highlighted the quick and efficient reaction to the new situation derived from the Covid-19, adapting all the current classroom training to the on-line/Virtual Classroom mode thanks to an advanced video-conference system, thus allowing the continuity of the courses in progress during the confinement. During this period, the Fundación Valenciaport has also created a new line of activity, webinars, making use of this platform, which has allowed it to have greater visibility in the national and international port community by giving a total of 9 “Port Logistics Webinars” and 3 webinars organised in collaboration with the CIP-OAS and aimed at the Latin American public with an excellent result that translates into more than 4,500 registered participants. In addition, Torregrosa informed the members of the Board of Trustees of the launch of the next programmes: the 1st edition in Colombia and the 2nd edition in Brazil of the Master’s Degree in Logistics and Port Management, which are still underway, and which, after an adjustment of dates, will finally begin in the second half of September and the second half of October, respectively; the collaboration with the Generalitat Valenciana for the implementation of a Dual Logistic-Port Training (VT) programme, which will be presented to the port community in the first week of July; and the opening of registration for the 29th edition of the Master in Port Management and Intermodal Transport (Valencia edition), which will begin on 15 October, as always in a classroom format and with a total of 20 places.

Finally, the director informed the board of the recent launch of the new corporate website of the entity, with a modern design, more visual, interactive and functional and fully accessible from all devices and screen sizes, which contributes to strengthening the brand image of the entity.

During the meeting, the members of the board of trustees reiterated their satisfaction with the results of the entity and reaffirmed their support for the Fundación Valenciaport project as an umbrella organisation for innovation and training at the service of the port logistics cluster.