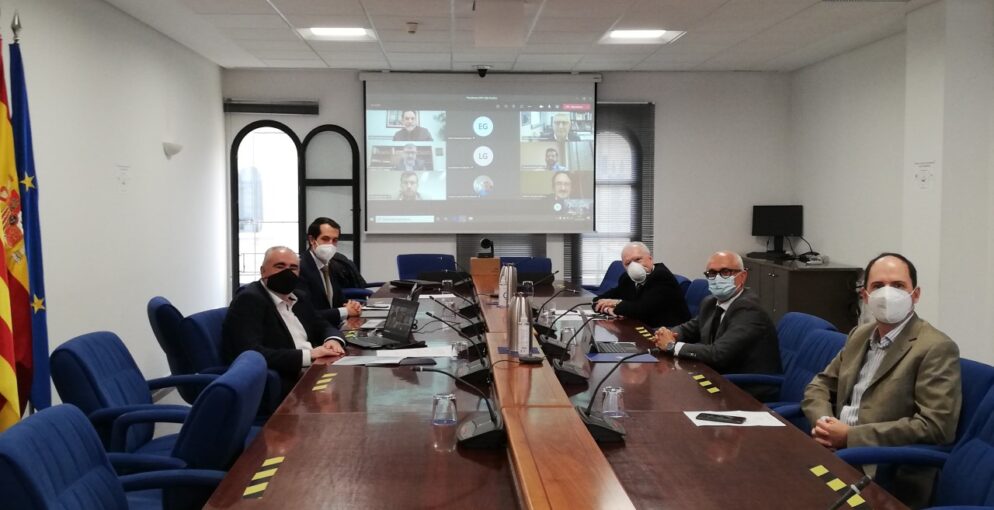 Valencia – 14.12.20. This morning Fundación Valenciaport held its ordinary board meeting for the month of December to approve the action plan and budgets for 2021, bringing the level of activity to 5,234,391 euros.

In the director’s report, Antonio Torregrosa highlighted as a milestone the notable increase in activity of Fundación Valenciaport in the field of European projects which, despite the COVID-19 pandemic, has participated in a total of 45 projects in this category during 2020, 10 more than in 2019 and 20 more than in 2018. Torregrosa highlighted, due to their relevance, the Ealing and Ealing Works projects, both co-financed by the CEF Programme, which will facilitate and accelerate the possibility of connecting ships to the electricity network in the Port of Valencia; as well as the B2T2 – Blockchain Based Tracing and Tracking project, co-financed by EIT Digital and which will develop a blockchain-based product to be used for tracking the movements of different types of assets as a given operation is executed. It also highlighted the work carried out in several projects co-financed by the Horizon 2020 programme, such as RESPOND-A, which will develop state-of-the-art technologies and strategies for protecting infrastructures from extreme situations caused by the impact of climate change, industrial accidents and/or terrorism; PLANET, an initiative that will develop tools to improve the interconnection of infrastructures (TEN-T, Rail Freight Corridors) with geopolitical developments (new Silk Road and emerging trade routes) and optimise the use of current transport modes through new technological solutions; or STAMINA, whose main objective is to support decision-making for the prediction and management of pandemic crises within and across European borders.

Next, the director underlined the recent award of other European projects such as Passport, Boostlog, WeTransform and Lasting (Horizon 2020 programme), which are expected to start this month or early in 2021.

The director also highlighted the successful celebration of the first Valenciaport Hackathon, an international event organised by the Valenciaport Foundation within the framework of the H2020 COREALIS project, which took place last November and was attended by 29 teams that presented interesting proposals to the challenges posed by the Port Authority of Valencia, Cosco Shipping Lines Spain, the Romeu Group and the Global Alliance for Trade Facilitation, and which received three awards sponsored by the Juan Arizo Serrulla Foundation, the Propeller Valencia association and the ALICE technological platform.

In the international field, the director highlighted the important technical collaboration signed with the public company Portos de Paraná with the principal objective of modernising the Brazilian ports of Paranaguá and Antonina through the simultaneous development of four technical assistances in the areas of technology, innovation and training, as well as the innovative service of Analysis and Diagnosis of Cybersecurity, especially created for ports and port operators that Fundación Valenciaport has recently launched in collaboration with S2 Group.

With regard to the Training area, the director mentioned as an important novelty the launch of the “Dual Vocational Training – Port Immersion” project, a pioneering initiative in the sector, promoted with the collaboration of the APV, the Valencian Government (GVA) and Propeller Valencia, in which the companies of the cluster and secondary education institutes participate with the main objective of adjusting the training so that it responds to the real labour needs of the companies and facilitates the labour insertion of young people. Similarly, Torregrosa expressed its satisfaction with the recent start of the 2nd edition of the Master’s Degree in Logistics and Port Management in Brazil (in semi-attendance format) and the 29th edition of the Master’s Degree in Port Management and Intermodal Transport in Valencia, which is being taught as always in attendance format and reinforcing the anti-VID-19 safety protocols.

Finally, the director once again emphasised the great benefit that the work carried out by the Fundación Valenciaport team represents for the whole of the port logistics cluster with data such as the 53 million euros of budget promoted by the Foundation during 2020 for the development of European projects, 49.5 of which are direct funding for the cluster, for the implementation of improvements and innovations in infrastructures and technologies in its fields of activity.