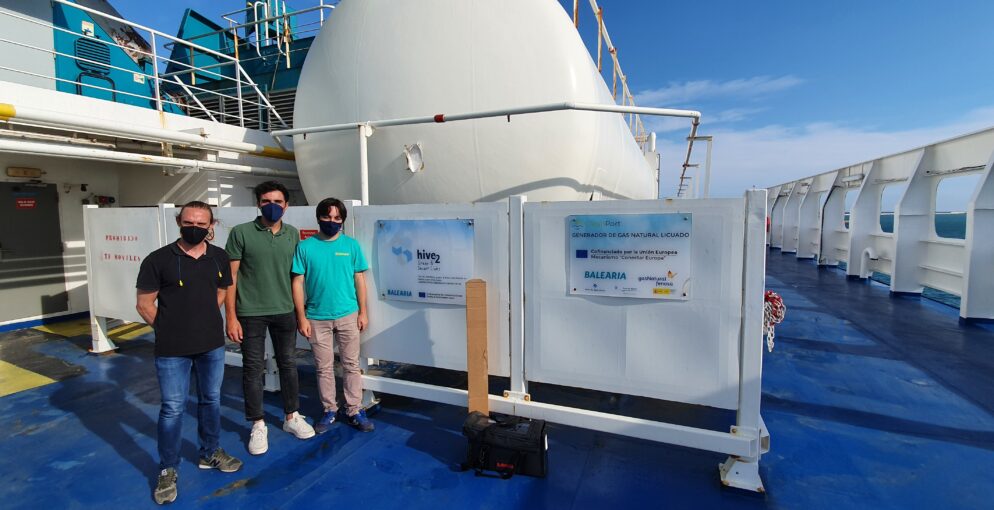 Valencia, 11.06.21.- Fundación Valenciaport and Baleària have started the second stage of the shipping company’s ship emissions measurement campaigns within the framework of the LNGHIVE2 Green and Smart Links – LNG Solutions For Smart Maritime Links In Spanish Core Ports project, co-financed by the European Commission within the framework of the CEF (Connecting Europe Facility) programme.

The project, which aimed to re-engine five of Baleària’s ships for propulsion with Liquefied Natural Gas (LNG), is entering its last phase, after the successful completion of the retrofitting processes of the Abel Matutes, Nápoles, Sicilia, Bahama Mama and Martín i Soler. With this project, Baleària becomes a European benchmark in the use of LNG as a maritime fuel that contributes to the energy transition towards a more sustainable sector.

This second stage of the emissions measurement campaign began on 2 June on the vessel Sicilia, on the Valencia-Ibiza-Valencia route, and continued on the vessel Abel Matutes, on 8 June, on the Alcúdia-Barcelona route, and will continue during the month of June to complete the vessels included in the project.

The aim of the campaigns is to take measurements, with specific high-tech equipment for measuring exhaust gases, while the ships are operating in a stationary regime. On both the Sicilia and the Abel Matutes, the team of technical experts from Fundación Valenciaport was able to measure emissions while the ships were operating with both types of fuel (natural gas and fuel oil), under the same sailing conditions. The operation of switching from one fuel to the other is carried out by the chief engineer once the vessel is out at sea.

Heading towards the final stage of the campaigns, the LNGHIVE2 project is in the final phase of validation of results, which will allow the environmental performance of the new fuel and its contribution to improving air quality and reducing the greenhouse effect to be assessed.