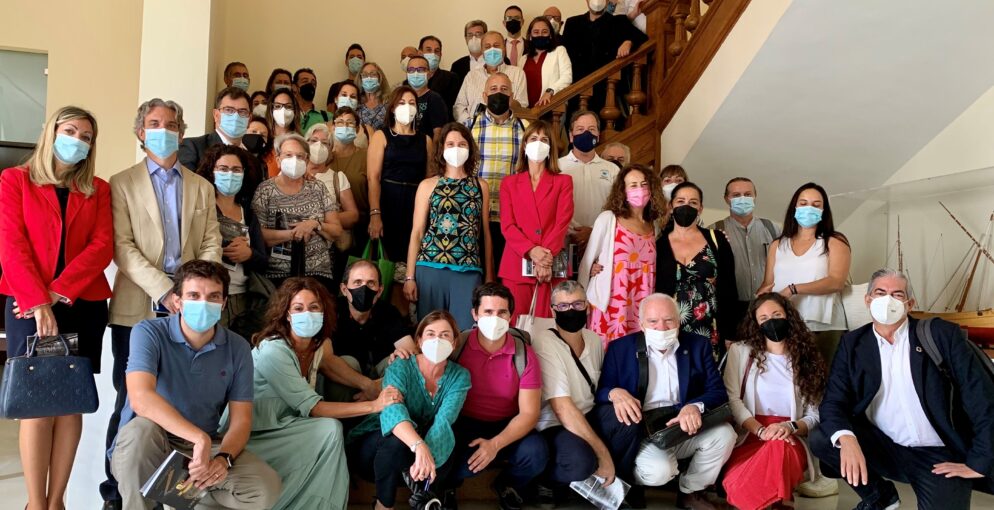 Valencia, 04.10.21. Aportem-Puerto Solidario Valencia has held the second meeting which brought together neighbourhood associations, schools, parishes and NGOs, mainly in the Maritime District, and with which the Association collaborates directly with the aim of making progress in the coordination of efforts and resources in order to promote social responsibility, solidarity and environmental protection.

Aportem,initiative in which the Fundación Valenciaport actively participates, convened this second meeting following the success of the first, held in November 2019. The aim of these initiatives is for each association, school and NGO with which Aportem collaborates to get to know others who are also promoting solidarity and corporate social responsibility, with coordination and joining forces as the primary objective.

On this occasion, the central theme of the meeting was training for employment. Attendees were able to learn details of a total of six organisations that offer employment-oriented training: the Family Guidance and Information Office, Novafeina, Novaterra, Taleia, Coordinadora Solidaria and Caritas Buena Guía. With these meetings, Aportem hopes that all those who are truly interested in improving the day-to-day life of the Maritime neighbourhoods will get to know each other and know how they can help each other. Aportem, as well as continuing to put the associations in contact with each other, has also offered to collaborate in removing the obstacles that may exist between employment training and those who need training. In this respect, it will allocate resources each year for transport grants, without ruling out analysing other types of aid to promote the training of people at risk of exclusion.

The meeting was also an opportunity for Aportem to review its latest actions. Among the initiatives carried out this year, the supply of food, school materials, clothing, footwear and anti-COVID material to people in the Port area, with special attention to children at risk of social exclusion, stands out. Aportem is currently in the middle of a campaign to supply school materials, clothing and footwear to some 700 children in the Maritime District. These children will also have some new educational toys at Christmas, thanks to the campaign that Aportem carries out every year at this time of year.

On the environmental front, Aportem highlighted the success of the No Plastic campaign, which aims to completely eliminate the use of plastic in the Valencian port sector. This achievement, which means eliminating one million plastic bottles a year, is getting closer and closer to being achieved, as some port terminals are already almost 100% plastic-free. In addition to this campaign, launched in 2019, Aportem is already working, in collaboration with other associations, on a future initiative to clean up plastic and microplastic from our beaches.

The Clock Building of the Port of Valencia is currently hosting the exhibition A Món a Bon Port, on the Sustainable Development Goals in the Port of Valencia, in which Aportem occupies different significant spaces, and which will be open to the public until 21 October.

Aportem – Port Solidarity Valencia, is a totally private association, made up of associations, institutions, companies and individuals linked to the Valencian port sector. Its activities are mainly focused on the Port of Valencia, with special attention to environmental care and children at risk of social exclusion.