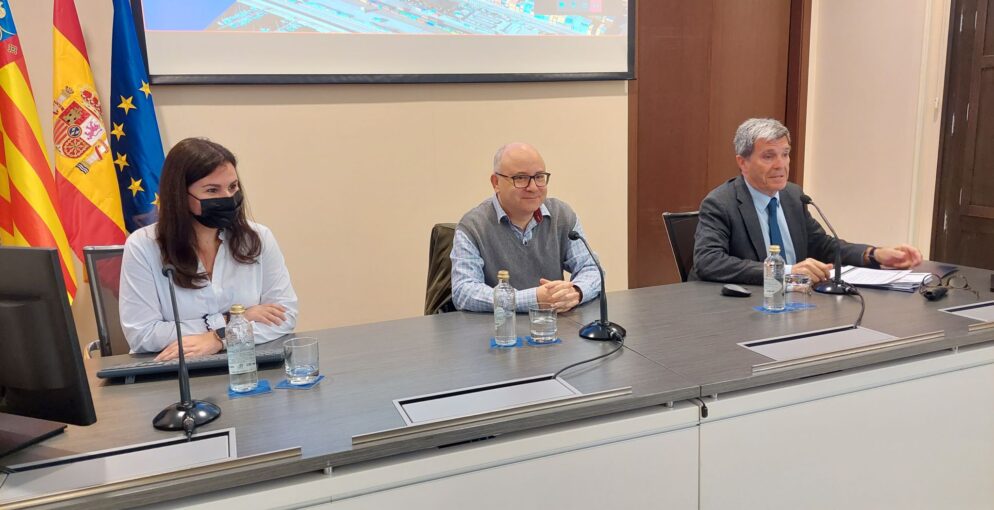 Valencia, 27 April 2022.- The president of the Port Authority of Valencia (APV), Aurelio Martinez, predicts that in 2022 freight prices will be adjusted, after the large increase in recent times, so that in 2023 the situation will normalise “although they will never be like the values of a few years ago”. In the case of the Valencian Containerised Freight Index (VCFI), this has gone from 1,101 points in December 2019 to 4,428 in March this year.

The head of Valenciaport took part in the seminar to present the VCFI annual report, organised by PAV and Fundación Valenciaport, in which different experts analysed the evolution of maritime traffic and the economic situation. “We find ourselves in a context of extreme volatility where in a few weeks the scenario changes. Since 2021 we have had COVID, the collapse of Suez, the lack of raw materials, the rise in energy prices, congestion in Chinese or North American ports, storms, the transport stoppage or the war in Ukraine. All this has had a major impact on the logistics sector and freight growth, especially from the second half of 2020”, explained the president of the PAV.

Determining factors
During his speech, Martínez explained the demand and supply factors on which freight rates depend, such as GDP growth, the evolution of international trade, protectionism in all its forms, business strategies, energy prices and environmental measures as exogenous factors that are outside the sector. On the other hand, the variants of the sector itself are conditioned by the balance of supply, the incorporation of new ships and the scrapping of obsolete ships, idle capacity/total capacity, cost reduction or blank sailings (cancellation of port calls).

After the pandemic, the freight index has also been characterised by the variables of global congestion, waiting times, increases in stopover times (handling, yard, etc.), the increase in business profits and back-haul pricing. In this sense, Martínez pointed out that “congestion has grown in all the ports of the world, especially in North America and part of China, but also in the Mediterranean and the port of Valencia. In our case, as in many ports in Spain, the terminal yards are collapsed”. For the president of Valenciaport, it is necessary to “look for new spaces, improve the internal management of the terminals and reduce the waiting times for containers in the yards”.

Regarding the collapse that the port of Shanghai is experiencing these days, Martínez pointed out that “it is not yet affecting the Port of Valencia. It is too early to see it and it depends on whether it can be solved in a reasonable time. The stoppage of these ships waiting to be able to load or unload has an influence on the fleet that is paralysed”, affirms the president of the PAV.

Watch out for decoupling
Vicente Pallardó, economic analyst at the Institute of International Economics (IEI) and senior researcher at the Universitat de València, has reviewed the international economic environment. Professor Pallardó highlighted “the strong and rapid recovery of the economy after the pandemic, although it has been very uneven, depending on the development of the countries. One thing that is common to all places is the high level of public and private debt”. Pallardó also pointed to the “unprecedented inflation of goods and services, both on the supply side due to supply chain problems and geopolitical elements, and on the demand side due to excessive public support and the failure of central banks to take the necessary measures.

For the IEI analyst, one of the key issues of debate is the decoupling of markets between the economies of democratic and non-democratic countries, in search of less dependence for strategic sectors or a reduction in the concentration of suppliers. “The relationship between the different economies cannot be broken; we will have to make trade-offs and seek balances. There is no economic justification, nor are there countries that benefit from decoupling, there are other interests.

Theo Notteboo, professor of port and maritime economics at the University of Antwerp, gave a presentation on the forecasts for container traffic. For Theo Notteboo, “cargo volumes in early 2021 were very high as a result of both stock replenishment and increased consumer confidence driven by vaccines and stimulus. Since August 2021, the growth rate has been slowly declining due to slowing demand. Growth prospects are further dampened for this year by high inflation, high energy prices, the war in Ukraine or the blockade of Chinese ports”.

Finally, Amparo Mestre, director of Market Intelligence of the Valenciaport Foundation has made a balance of the VCFI in 2021 where a trend has been visualised with strong rises between March and July last year due to high demand and congestion problems, while in the second half of the year there has been a more moderate growth, something that is also shown in the first quarter of 2022.