The Fundación Valenciaport’s start-up will be financed by the Ports 4.0 Fund 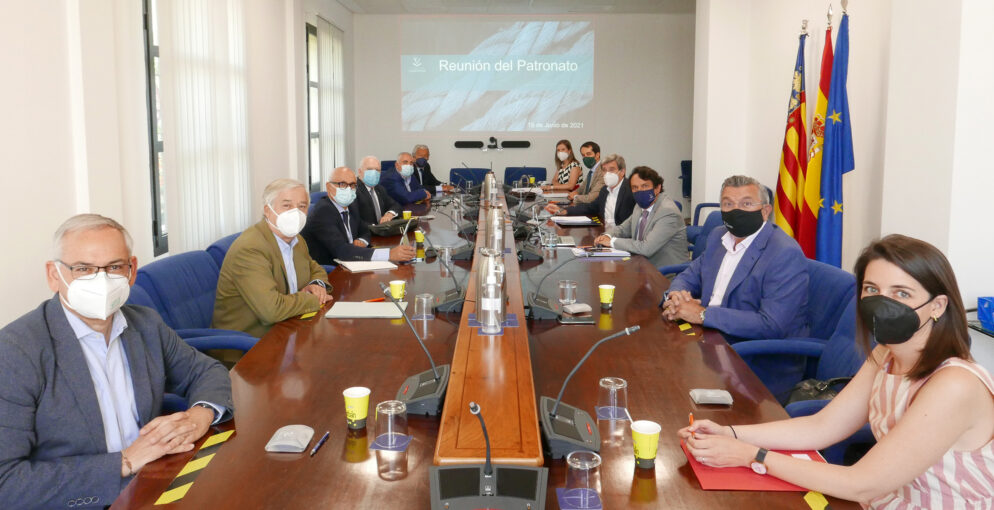 Valencia, 15.06.21.- The Board of Trustees of Fundación Valenciaport today held its ordinary meeting for the first half of the year, at which it approved the Activities Report and the Annual Accounts as well as the Foundation’s Management Report for the financial year 2020.

The general director of the Foundation, Antonio Torregrosa, explained in detail the activity carried out by the entity during this period, starting, as usual, with the new innovation projects on which Fundación Valenciaport has been working since the beginning of 2021. These are two projects funded by the Horizon 2020 programme: PRAETORIAN, which will increase the security and resilience of European critical infrastructures, facilitating coordinated protection against physical, cybernetic or combined threats and which was created as a continuation of the SAURON project; and ILIAD, also a continuation of another project, ODYSSEA, whose objective is to develop, operate and demonstrate the Digital Ocean Twin; as well as an initiative funded by the Interreg MED programme: TOURISMED MED PLUS, which aims to capitalise on the results of the previous TOURISMED project in new territories, in which a new business model for fishing tourism was launched. On the other hand, the director pointed out that new funding has also been obtained to continue with the development of the adaptation strategy of the ports managed by the Port Authority of Valencia in the face of the effects of climate change.

In terms of open innovation, the director of the Foundation has informed the members of the board of trustees of the next update of the Innovation Plan of the Port of Valencia Logistics Community, which will be undertaken from September, as well as the launch of new initiatives, also within the framework of the Innovation Committee, such as the system of “Challenges open to startups” or the realization of informative webinars on funding opportunities for innovative initiatives in the port logistics sector. On the other hand, he expressed his satisfaction for the continuation of the SuperLabPorts activities with the participation in the Maritime ClimAccelerator, an initiative also financed by EIT Climate-KIC which, during this year, will offer funding, training, advice and mentoring to more than 30 start-ups that provide innovative solutions for the transition towards sustainability in the maritime industry. Finally, he highlighted the success of SEAPort Solutions, the spin-off of Fundación Valenciaport, which has recently been selected by the Ports 4.0 Fund in the commercial project modality.

With regard to international cooperation, Torregrosa highlighted the technical assistance commissioned by the CMA CGM group for the development of an audit of its port and inland container terminals worldwide, with the aim of assessing the energy and technological transition of its facilities towards an environmentally sustainable operating model. He also informed the Board of Trustees about the extension of the scope of the contract with the Inter-American Development Bank (IDB) to complement the study for the implementation of the “Callao Smart Port”, as well as the assignment from UNCTAD for the development of the Manual “Building port resilience against pandemics”, developed in collaboration with the Port Authority of Valencia, as part of the course on management of pandemics in ports within the framework of its TrainForTrade programme.

In relation to the training area, the director highlighted as a milestone the recent start of on-site classes in the port of Valencia for the students selected to take part in the 1st edition of the Port Immersion Dual Vocational Training, a pioneering initiative in the sector whose aim is to adjust the training so that it responds to the real labour needs of companies and facilitates the integration of young people into the labour market. He also reported on the successful completion of the four stevedoring courses given by Fundación Valenciaport, thanks to which a total of 80 students have been awarded certificates enabling them to work in stevedoring.

During the meeting, the members of the board of trustees reiterated their satisfaction with the results of the entity and reaffirmed their support for Fundación Valenciaport’s project as an umbrella organisation for innovation and training at the service of the port logistics cluster.