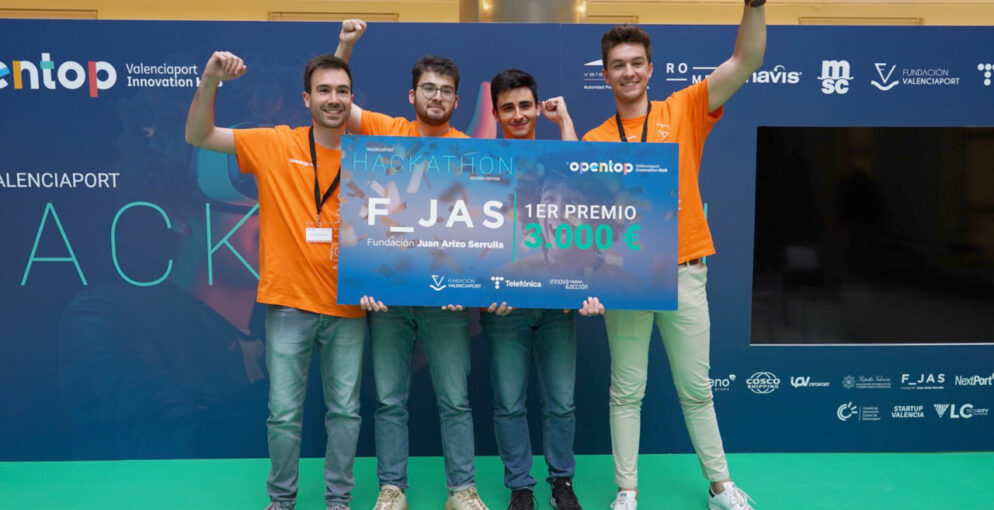 9/05/2022. The awards ceremony of the II Valenciaport Hackathon took place yesterday afternoon, an event framed within the Opentop initiative, promoted by Fundación Valenciaport in collaboration with Telefónica Open Future.

Beforehand, the Pitch Battle or final defence of the projects developed by the 12 teams that participated in the hackathon over the weekend was held. The participants presented their proposals before a professional jury, the audience present, and the audience that followed the event live on Youtube. After the jury’s deliberation, the two winners of the hackathon were announced.

The main prize, with a cash prize of €3,000 awarded by the Juan Arizo Serrulla Foundation (FJAS), was awarded to the “Tostimizer” project, the solution that one of the teams presented to the challenge proposed by Navis.

“Tostimizer” is a cloud application based on an algorithm that can optimise inefficient container movements in the terminal. Through this software it is possible to locate the optimal position for each container, during the unloading process of the ship, through the analysis of its departure time. In addition, the use of auxiliary yards is proposed to temporarily store them until they have that optimum position in the terminal. The primary objective of this software is to minimise inefficient container movements, which can be visualised intuitively in the new interface presented.

The second prize, worth €1,000 from the Association of Logistics Managers and Entrepreneurs Propeller Valencia, was awarded to the project “thePORT-ABLEexp”, a solution to the challenge posed by the Port Authority of Valencia.

“thePORT-ABLEexperience” is a proposal with two approaches but with a common objective, to bring the port closer to the citizens by establishing links with them and strengthening the existing ones. On the one hand, they propose a physical mobile space created inside an interactive and multisensory container with digital activities, totems, musical experiences and 3D glasses, which can be installed in any port and city of any country to share the port world with the citizens.

On the other hand, they presented a gamified application with which to obtain “port coins” depending on the citizen’s participation in events related to the port, proximity to emblematic facilities, etc., which can then potentially be exchanged for discounts, services, products or merchandising from related companies.

In this second edition of the Valenciaport Hackathon, the following challenges were addressed: the prevention of human error through artificial intelligence (Romeu Group challenge), the decarbonisation of the logistics chain (MSC challenge), the search for the optimal location of each container in the terminal (Navis challenge), and the generation of links between the port and the citizens through the commitment to the UN SDGs (Valencia Port Authority challenge).

Over three days, the participants developed innovative solutions in response to the challenges posed. To do so, they have had the advice and support of expert mentors in ports and foreign trade from the sponsoring entities, the organisation Innova & Acción, and the promoters of the initiative, Fundación Valenciaport and Telefónica Open Future.

Throughout the weekend, different workshops focused on creativity, prototyping, business model canvas, pitch and KPIs, which have been guiding the participants with techniques to finish their proposals successfully.

In addition, two Keynote Sessions were held where participants were able to learn first-hand about the state of the sector. On Friday, the session was given by Ignacio Ballester, Deputy Country Manager of MSC in Spain, who presented “Innovation for a culture of constant evolution in maritime transport”. During the talk, he took the opportunity to ask the participants for all their initiative to challenge the companies, which are also willing and demanding young and fresh minds full of ideas.

On Sunday, Scott Holland, Chief Product officer at Navis, spoke about “Evolution from execution to orchestration”. Scott gave a full presentation on the state of the sector and the challenges it is currently facing, and took the opportunity to reiterate his desire to incorporate new professional profiles to Navis from among the participants of the hackathon, a great opportunity for all of them.

The activities took place in the Clock Building of the Port of Valencia, including a boat tour to get to know the different terminals, their infrastructures and how the port works.

The jury of the II Valenciaport Hackathon was made up of representatives of the companies responsible for the challenges, the organisation and Fundación Valenciaport: Ignacio Ballester, Deputy Country Manager MSC Spain; Scott Holland, Chief Product Officer at Navis; Jorge Marcos Martínez, from the Innovation and Development team of the Cluster of Fundación Valenciaport; Iñaki Olaizola, Business Process Excellence Manager at Tiba (Romeu Group); Juan Manuel Díez, Head of Strategic Planning and Innovation at the Port Authority of Valencia; Inés Oliveira, Global Head of Telefónica Open Future; and Olga Broto, General Manager at Innova & Acción.

Opentop is an initiative, led by the Valenciaport Foundation, which seeks to become a global benchmark in open innovation in the port logistics sector, fostering the creation and growth of innovative technology companies.

Opentop will give participating startups the opportunity to work directly from and with companies in the port community of the Port of Valencia, Spain’s leading port in terms of container traffic and the fourth largest port in Europe, fostering entrepreneurship not only regionally, but also nationally and internationally, while strengthening the city’s business fabric.

One of the first activities to be launched within the framework of Opentop is its incubation and acceleration programme for the development of which the Valenciaport Foundation has Telefónica as a strategic partner.

The first business incubation period is scheduled to begin next month, in which participants will be able to count on the support of agents from the sector to develop digital and innovative projects in the port sector.

All the details of this new stage of Opentop will be communicated very soon after the II Valenciaport Hackathon.

On the website opentop.es you can find out more about the initiative.